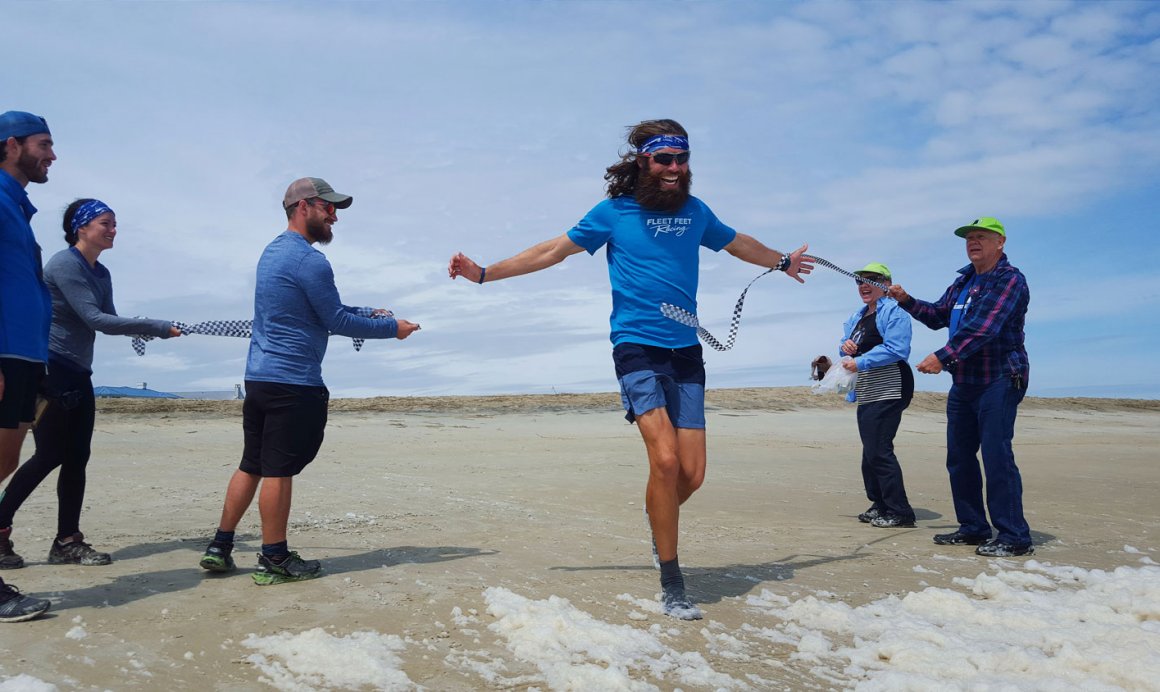 We are proud to be supporting Ultrarunner Adam Kimble’s journey to break the longstanding Guinness World Record for fastest run across the United States. That’s 3,030 miles from Huntington Beach, CA to New York City with a goal of less than 45 days or 68 miles per day. He will run more than two and a half marathons every day for 45 days. In a recent article by Runner’s World they reported Adam ran his first marathon only three years ago.

Noxgear is excited to support Adam as the title partner for this incredible challenge. Learn more about his inspiration and journey at AdamKimble.com. Recently we’ve also supported coast-to-coast runs One Run for Boston and Run 2 Respond. We have also supported several teams running in the Ragnar Relay Series and the Hood to Coast relay. The performance and durability of the Tracer360 makes it the perfect night running vest for these long distance runs and relays.

Adam has been running with Noxgear’s Tracer360 Visibility Vest since 2013, which means he’s put a lot of miles on one of the first vests ever made. Averaging 68 miles per day means that he will rack up plenty of hours in the dark. Miles of pavement with no shoulder, dangerous blind hills and turns and shared with commuters taking their first sips of morning coffee, checking their emails or coming home after a long day. Adam and the crew will count on their Tracer360 vests for visibility. We’re thrilled to be a part of it.

So what’s an ultrarunner’s take on the Tracer360? Taking a break from preparations Adam generously spent a few minutes to tell us about his long history running with the Tracer360.

I first used it at the Ragnar Relay Race in Colorado, and every team we passed was asking us where to get one! I’ve been hooked since day one. Its comfortable, reliable and most importantly, it improves runner safety.

What’s your biggest concern while running in the dark?

The biggest concern for me is a blind turn. I usually run facing traffic when I have a shoulder because I like to see the cars coming at me, but on a blind turn I usually move to the other side. The Tracer360 is so helpful because in that situation you need to catch their attention quickly, especially if they are distracted. For a car coming down a straight road they usually have plenty of distance and time to see me, but coming in to a turn shortens the distance and time to respond. It also probably means that the headlights aren’t illuminating any reflectivity I have on. The Tracer360’s multicolor illumination grabs their attention in those crucial seconds.

Obvious question for a long distance runner: How does the Tracer360 hold up?

Maybe Noxgear should partner together with Ford, because I think the slogan “Built to Last” is pertinent!  Since the Tracer360 is all-season and rainproof, I haven’t had any issues at all with durability.  The battery life is amazing and even when you need to make a switch, the blink battery notification kicks in and you know right away to change the batteries.  These features are going to be ever-important during our transcontinental journey.