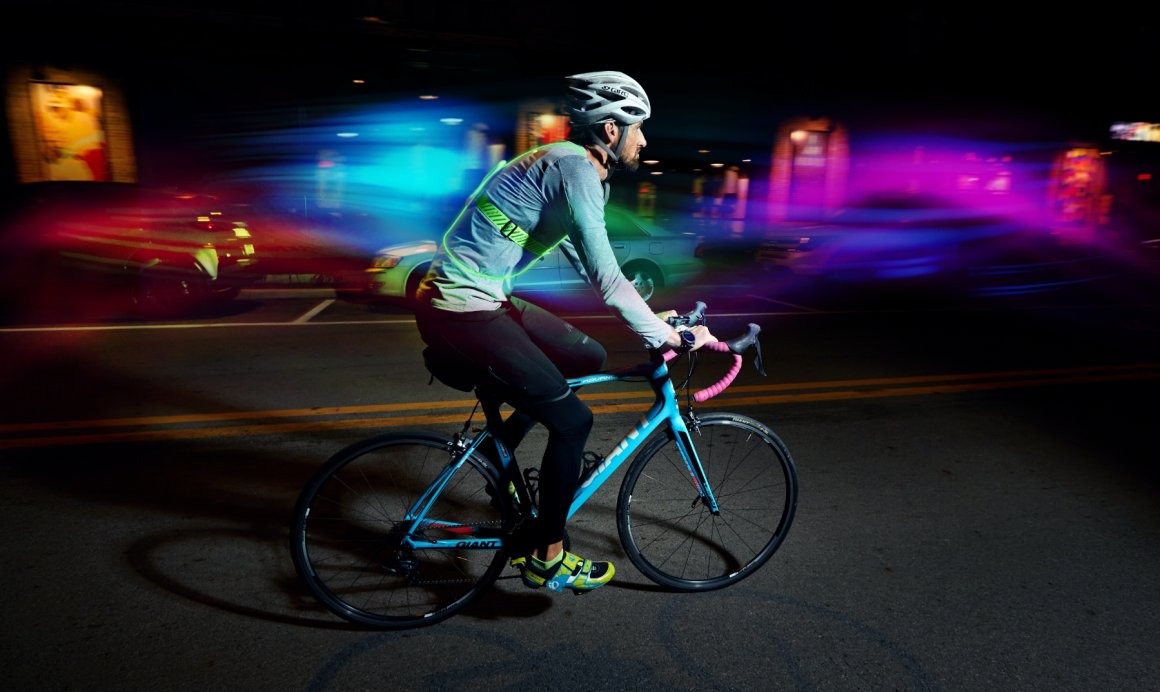 Visual ScienceIt’s this research that inspired us to do something about the problem of visibility and road safety.

It became clear to us that to truly achieve better safety, we needed to engineer products that worked with the way the human eye perceives color, patterns, and movement. This is the visual science that we built into our Tracer2 and LightHound visibility products. Ensuring you, your loved ones, and your pets are as visible as possible to motorists and distracted drivers.

Our eyes are most sensitive to the color yellow just before and during dusk.

Both the Tracer2 and LightHound are constructed with high visibility fluorescent yellow fabric which actually glows lime green from invisible UV light at dawn and dusk. Because of this, both products transition from ultra-bright yellow to a green glow just as the eyes transition from daylight adapted vision (most sensitive to yellow) to dark

adapted vision (most sensitive to green).

Once our eyes adapt to the dark, they are most sensitive to the color green.

The rod cells of the human eye, are super-sensitive to brightness, especially the color green, and provide most of our vision in the dark.

During dawn and dusk, nothing competes with fluorescence.

The Tracer2’s high visibility yellow belt includes the latest fluorescence which not only converts UV radiation but also high energy blue light into a glowing green. Likewise, the LightHound uses fluorescent fabric to complement its reflective and lighted elements.

Not only are the cells of your eyes less sensitive to the color red, the color is also best seen only when your eyes are looking directly at something red. This is because the red-sensitive cones of our eyes are almost exclusively in the center 1.5% of the retina – hardly giving you the eye-catching effect you’re hoping for.

The likely reason that so many red LEDs are still used today is that for the longest time, they were the most economical and lowest power LED solution. Surprisingly, even as LED technology progressed, safety products remained red, perhaps out of tradition.

When designing our visibility vests for humans and pets we integrated advances in LED technology and special fiber optics to create true 360-degree multicolor illumination using four high-powered LEDs. It could easily take hundreds of multicolored LEDs to produce the same level of visibility.

Reflectivity is key to motorist visibility

Today’s 3M reflective technology contains thousands of tiny glass beads or specially engineered optical prisms that reflect light back to the source, regardless of the direction. The reflective elements along the upper torso combined with the highly reflective elements on most of today’s athletic shoes have been shown to improve pedestrian conspicuity along roadways. Our minds can quickly distinguish a human in motion using the concept called biological motion, or biomotion. Being distinguished as a person amid all of the reflective road signs and mailboxes significantly improves the ability of motorists to see and avoid you. The full power of biomotion is intriguing and has gone as far as to show that we can determine mood, gender, and weight by observing only a few key points known to invoke the perception of biomotion. One key takeaway is that more reflectivity is better.

Using the unmatched reflectivity of 3M™ Scotchlite™ Reflective Material, we designed the Tracer2’s belt and the LightHound’s harness, as well as both LED enclosures, to provide extreme reflective visibility from all 360 degrees. This makes our customers visible even in low-beam headlights and from more than a mile away in high-beams.

Going the extra mile for our customers’ safety means a lot to us. As technology improves and more is learned about road safety and visibility, we commit to continuing to innovate on our products to ensure your family and pets benefit from the life-saving properties of visual science.

To learn more about the backstory behind Noxgear, click here.